Welcome to the Gimp Island Wiki!Edit

Welcome! We are a collaborative community that seeks to record the international dramas of Gimp Island. Especially after the Great Ransacking, it is paramount that we get this information set in stone before it is lost forever at the hands of time.

Gimp Island is a remote isle in the Northern Pacific Ocean about 2,500 miles west of Seattle. The island is home to many countries. The southwestern region, known as the Western Reaches, is occupied by the Yonkage. The northwestern peninsula and the coastlands to the immediate south are dominated by the sovereign nation of Klaus. Klaus is surrounded by Koropistrano, which extends to the northeastern extremity of the island. The lands surrounding the Bay of Sharks and the rebellious province of Costa Azul are occupied by Kawanda.

These five states rarely see eye to eye in terms of policy and ideology, but all are firmly opposed to foreign imperialism, as was witnessed when all five states threw off foreign rule during the twentieth century, and again when they fended off a British onslaught in the Great Gimpling War. 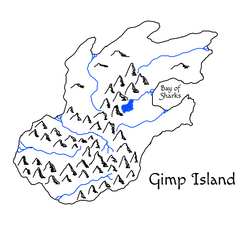 A geographical map of Gimp Island. 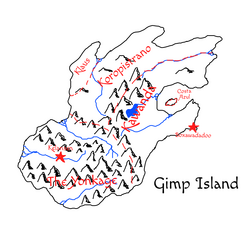 A political map of Gimp Island.
Add a photo to this gallery
Retrieved from "https://gimp-island.fandom.com/wiki/Gimp_Island_Wiki?oldid=317"
Community content is available under CC-BY-SA unless otherwise noted.